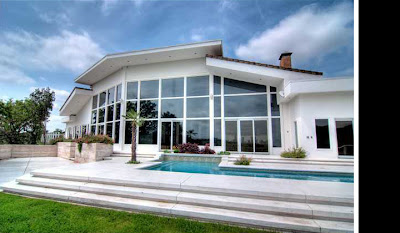 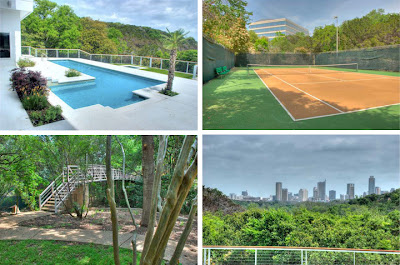 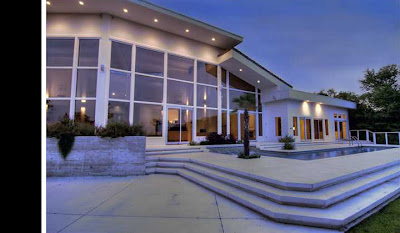 YOUR MAMAS NOTES: Just a couple years ago, according to the folks at Forbes (via The Hollywood Reporter), Oscar-winning actress and producer Sandra Bullock (The Blind Side, Crash, Miss Congeniality and etc.), was widely reported to be one of the—if not the—highest paid actresses in all of Hollywood who took in a knee-bucking and bank account filling $56,000,000 between June 2009 and June 2010.

Even if that income estimate is off by several million clams and even if—hypothetically speaking—her income has plummeted in the last couple of years, it should come as no surprise to the children the otherwise low-key superstar single-mommy of one has adequate funds to own an impressive property portfolio that bursts at the seams with more than half a dozen luxury residences from California to New York.

Since at least the mid-1990s Miz Bullock has owned a home (and numerous businesses) in the music-loving, lefty-liberal Texas city of Austin where a month or so ago she chose to lighten her considerable and no-doubt costly-to-maintain real estate load and hoisted a walled and gated estate southwest of downtown Austin on the market with an asking price of $2,500,000.

Property records reveal Miz Bullock bought the privately-positioned but somewhat oddly-located property way back in April 1997 for $575,000. The rear of the presumably heavily fortified property backs up to a greenbelt trail—good for those who enjoy jogging and other such torturous physical activities—but it's peculiarly if somewhat clandestinely situated just off the busy MoPac Expressway in a decidedly unpretentious enclave southwest of downtown that's bordered by chunky suburban-looking office buildings; a few handfuls of two-family and a few more handfuls of less impressive but hardly inexpensive single-family homes; and a slew of large rental apartments and condominium complexes.

Listing photos show only the sylvan grounds and rear exterior façade of the white stucco and smoked glass contemporary that overlooks Barton Creek but do describe the 5,663 square foot two-story house as sitting on 1.75 gently sloping acres and as having 3 bedrooms, 2.5 bathrooms. The back of the house opens to a multi-level scored concrete terrace, lap lane swimming pool, in-ground spa, and unobstructed views of the downtown sky line over the carpet of tree tops that shade the green belt that snakes along the rear flank of the estate. One of the gawd-awful nearby office buildings looms over a lighted tennis court tucked away in a far corner of the property.

The children should not confuse or conflate the Austin residence Miz Bullock just tossed on the market with her far more substantial 5.81 acre estate on Lake Austin. She bought her lake front spread around the turn of the century and subsequently spent millions to custom build a massive mansion only to move out just days after moving in over concerns about mold and shoddy workmanship. She sued the builder and, in 2004, after, an 8-week trial was granted $7,800,000 in damages. She razed the moldy mansion—but kept the back terraces and swimming pool complex that were built along with it—and the compound-like property now has several smaller residential structures plus a three-bay, two-story boat house. 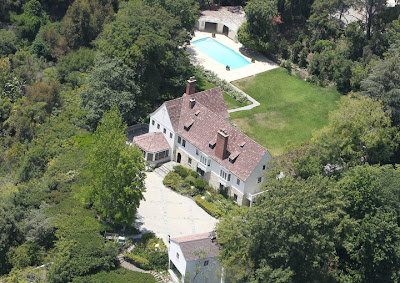 Even when she off-loads her long-time Austin digs near downtown Miz Bullock and in addition to her Lake Austin compound will still own six (and maybe more) homes across the country including a dour but kinda legendary (and sadly neglected) Old Hollywood-style 8,110 square foot Tudor-style pile on 4.1 acres in Beverly Hills, CA (above). She bought the private perch in May 2011 for $16,190,000 from gaming, entertainment and telecom entrepreneur Reagan Silber.

At one point the great estate high above Bev Hills also encompassed a second, lower parcel with tennis court and guest house accessible by funicular and was previously owned but a slew of Tinseltowners and big business types including restaurateur Peter Morton, radio station tycoon Norm Pattiz (who split and sold off the lower section in late 2006 for $3.5 million to a non-celeb), multi-billionaire music and media magnate David Geffen and That Girl Marlo Thomas.

As far as we know (and can tell based on a quick perusal of property records), Miz Bullock still owns a much smaller 3 bedroom and 3 bathroom residence a few miles away in West Hollywood (CA), bought in early 2001 for $1,495,000 and located just up the road from the Chateau Marmont Hotel and next door to a house owned by Cammie Diaz who—we presume—has decamped for the 3-acre Bev Hills (Post Office) compound she bought from Candice Bergen in 2010 for $9,477,500. 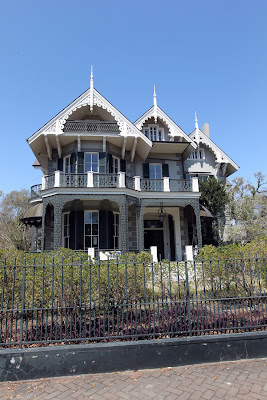 About six months after buying the house next door to Cammie D., Miz Bullock spent another $1,495,000 on an eight (or maybe it's ten) parcel ocean front spread in Tybee Island, GA and in June 2009, just over a year before she was adopted a baby and dumped her philandering ex-husband Jesse James, she shelled out $2,250,000 on the historic Koch-Mays House, an elaborate mash-up of a Gothic Victorian and a Swiss Chalet-style confection in the Garden District of New Orleans (above), originally built in 1876 for U.S. Sentator and Ambassador to France James Eustis with 5 bedrooms, 4.5 bathrooms and a whole lot of lacy iron work. 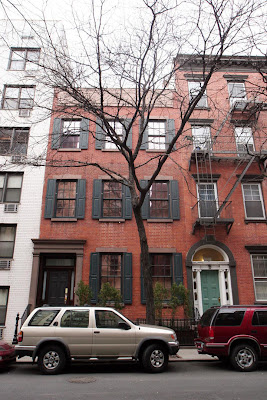 Miz Bullock's impressive (and no-doubt costly to maintain) property portfolio, as far as we know and can tell from a perusal of property records, also still includes a townhouse in New York City's SoHo 'hood (above) scooped up in January 2000 for $3,350,000 as well as a two lot spread with a Rocky Mountain appropriate, log-style residence just outside of Jackson Hole, WY.